We offer an understanding ear to all people 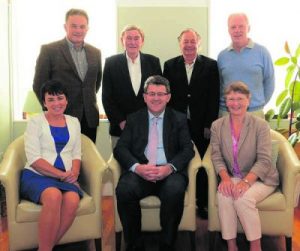 David Gleeson, a chartered accountant by profession, first became a volunteer at Vita House over a decade ago and now acts as its chairperson.

“Our legal structure is a company limited by guarantee and that has been set up for the last number of years and I currently act as the chairperson.

“I’m a chartered accountant by profession so I hopefully bring some of the experience gained in that field to this role in a voluntary capacity,” he said.

Since its foundation, Vita House has always relied on dedicated people with a passion for helping and supporting others.

“At the top of the Vita House structure, so to speak, is the board of directors, and we have voluntary people on that. We would have some employed people but we have a good few volunteers, people who help out on a day-to-day basis as the need arises.

“It’s the quality of the service that’s being offered here by those people. We cater for all types of people, whether it’s families or individuals or partnerships. We are, of course, non-judgemental in the services that are provided so they feel that they get a good quality service and good advice on the issues that they bring here and that they’re given a sympathetic, non-judgemental ear”.

While Vita House is situated on the grounds of the Sacred Heart Church, David emphasised the fact that the service is non-denominational.

“We cater for all people, whatever creed they have. When someone comes to the door we don’t ask about faith or whether they even have a faith, they are invited in and whatever their problems are we try and help them. We are non-denominational and we look after everybody,” he said.

Funding for services such as Vita House is vitally important and David says that while there is some government funding available, the people of Roscommon and surrounding areas have played their part.

“We would get grants from various government agencies that provide some of the services but we also rely on voluntary donations, for example for the Suicide Bereavement Service and also the Cancer Care services.
“We are indebted to the people, particularly in the Roscommon region, who have supported us in the recent past and continue to support us”.

Looking to the future, David believes the need for the services provided at Vita House will continue to grow.

“Unfortunately, the demand for the services is not reducing, it’s increasing, and that’s maybe a sign of the society we are living in and the so-called pressures that are put on people in modern living.So there’s greater demand on our services and our brand new offices that we have here are at maximum capacity. We will have to take into account how to cater for this extra demand for services. That’s a constant issue that we, as the board of directors, and Marian Keigher, as Director of Services, are constantly looking at and how we can improve services,” he said.

Despite the challenges he faces as its chairperson, David finds reward in the fact that Vita House has helped so many people in need.

This website uses cookies to improve your experience while you navigate through the website. Out of these, the cookies that are categorized as necessary are stored on your browser as they are essential for the working of basic functionalities of the website. We also use third-party cookies that help us analyze and understand how you use this website. These cookies will be stored in your browser only with your consent. You also have the option to opt-out of these cookies. But opting out of some of these cookies may affect your browsing experience.
Necessary Always Enabled

Any cookies that may not be particularly necessary for the website to function and is used specifically to collect user personal data via analytics, ads, other embedded contents are termed as non-necessary cookies. It is mandatory to procure user consent prior to running these cookies on your website.

SAVE & ACCEPT
Go to Top